What is Baltic Amber? In ancient times it was called the gold of the North. Amber has been called freezing gold, a window to the past, a time capsule, captured sunshine and a golden tear. It is all of these things.

Amber has long been prized for its beauty in jewelry. The beautiful warm golden color fascinates jewelry admirers everywhere. However, it is so much more than a piece of art.

When amber captures and holds insects, some intact, it becomes a treasure, a fossil. Each and every form of fossil is precious. Why? Because they provide so much information about past life on earth.

Baltic Amber is fossil of resin. Although not a mineral, it is generally classified as a gemstone. A common misconception is that Amber is made of tree sap. Sap is the fluid that circulates through a plant's vascular system, while resin is the semi-solid amorphous organic substance secreted in pockets and canals through epithelial cells of the tree.

Because it used to be soft and sticky, tree resin amber can sometimes contain insects and even small vertebrates, known in the jewelry world as ‘Inclusions’.

Amber occurs in a range of different colors. As well as the usual yellowy-orange that is associated with the color "amber", amber itself can range from cloudy white, yellowish clear, to almost black. There is also red amber (sometimes known as "cherry amber"), green amber, pink amber and even blue amber, which is rare and highly sought after. 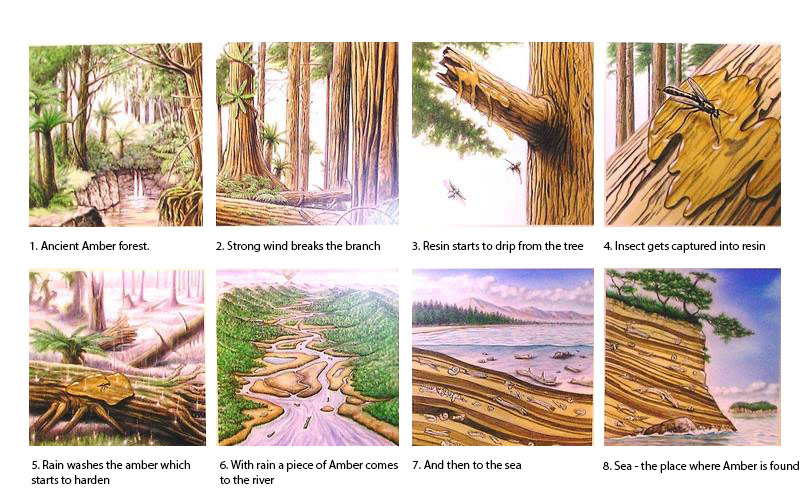 There grew evergreen, oak, beech, red chestmut, elm, laurel, willow, maple trees as well as palm trees, magnolias and cinnamon trees. The climate was warm and humid. Big amounts of resin was extracting of pine trees "Pinus succinifera". If the resin had been deposited on the forest floor, it would have been destroyed by oxidation and drying processes. Therefore the first and most essential step to conservation was rapid transport by rivers out of the forest into oceans or lakes, where the amber was protected from weathhering. Nearly all of the amber deposits known so far are found within marine environments, on so-called secondary deposits.

Baltic region is home to the largest known deposit of amber, called Baltic succinite. It dates from 44 million years ago. It has been estimated that these forests created more than 100,000 tons of amber.

Amber was appreciated many years ago and still is. It's used for a jewelry and decoration, and sometimes in alternative medicine. Because Amber formation has stopped many years ago the webs are runnning out, so it's getting more difficult to find it and because of that the value of amber is growing up.